ZINC DEFICIENCY
| A World-wide Problem for our Soils

Zinc is a trace element found in varying concentrations in all soils, plants and animals and is essential for all forms of life.

Zinc is needed in small but critical concentrations and if the amount available is not adequate, plant and animal life will suffer from the physiological stresses brought about by the dysfunction of enzyme systems and metabolic functions in which zinc plays an important part. 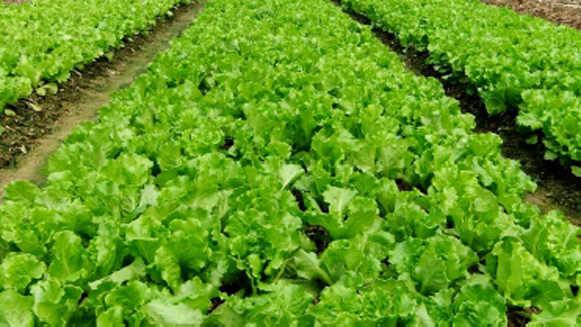 The following world map shows the zinc deficiency zones, in two measures (widespread and medium), across the globe. 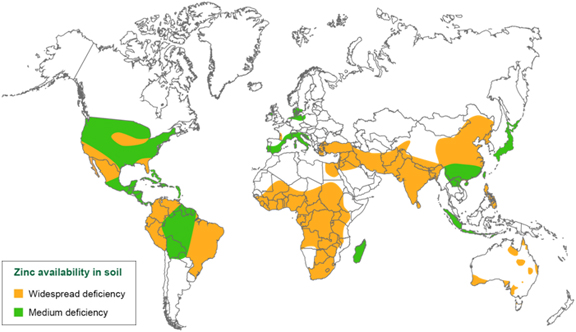 What this shows is:

Zinc is essential for life – in all its forms – whether soil, plant, animal or human.

Zinc deficiency in humans results primarily from reduced dietary intake, and it is reported that as much as 25% of the world's population is at risk.

By increasing the amount of zinc in the soil, and thereby passing it to productive, healthy and attainable crops, is an effective preventative measure to ensure greater human health. Zinc plays an essential role in numerous biochemical pathways within the body and is important for the skin, the gastrointestinal tract, the central nervous system, plus the immune, bone and reproductive systems.

Soil zinc is an essential micronutrient for plant growth and development and is heavily involved in enzyme systems that regulate the early growth stages. It is vital for fruit, seed and root system development, photosynthesis, formation of plant growth regulators and crop stress protection. Zinc is also a team player with nitrogen (N), phosphorus (P) and potassium (K) for many of the plant's development processes.

Farmers and growers know that both yield and financial return are effected significantly by the under performance and yield losses that can be associated with soil and paddock variability.

It is also typically known that yield potential of all crops and varieties is heavily dependent on the availability of zinc in order to achieve increased outcomes.

Some of the difficulties farmers and growers are confronted with are:

The Three Most Effected Cereal Crops

Corn (maize), wheat and rice, three of the world’s most important cereal crops, are all affected by zinc deficiency. Clearly, everything that grows in zinc depleted soils will suffer, but of these three major crops, rice will be looked at a little more closely.

Corn Maze
Corn (known as maize in many parts of the world) is the crop species which is understood to be most susceptible to zinc deficiency. Corn generally accounts for the highest use of zinc fertiliser per hectare, more than any other crop. With the increase in demand for corn in addition to human food supply, for livestock feed and biofuel production the mitigation of zinc deficiency in this crop is going to remain an important crop nutrition priority.

Wheat is less sensitive than corn, but it is still severely affected by zinc deficiency in many parts of the world, especially the larger broad-scale farming enterprises in Australia, North America, Europe and the countries of Russia and Eastern Europe. Low available zinc concentrations in chalky soils, with a relatively high phosphorus status tends to be the most widely found cause of zinc deficiency in wheat.

What We can Do

Soil and foliar applications of zinc fertilisers can effectively address this problem. But, our knowledge of the cycle of life held within the soil should also be at the forefront of decision-making to ensure a sustainable future.


However most importantly, fertilising with zinc not only increases zinc content in zinc deficient crops, it also increases crop yield.

Balanced crop nutrition by supplying all the essential nutrients, is a recognised, cost effective management strategy. Even with zinc-efficient crop varieties, zinc fertilisers are needed when the available zinc in the topsoil becomes depleted, and we already know that the world's soil is under serious strain in this regard. 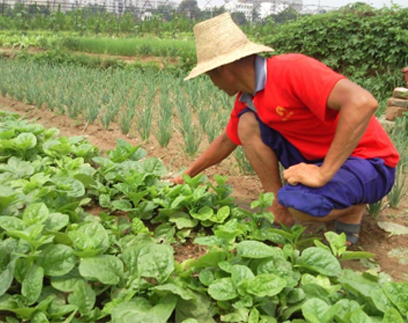 But for all the reasons already discussed, and what science and research has already taught, we know that a new way of fertilising is needed to deliver the required results in an efficient and sustainable manner.

The Experience of Our Customers

Click here to view in full
During January 2015 to April 2015 several trials were conducted at the Research and Development Farm in Bashon, Gazipur, Bangladesh. These trials were carried out by RLF's partner in Bangladesh, and the map plots the location of the R & D Farm. This area historically receives approximately 90mm rainfall during these four months from an approximate number of 10 rain days. 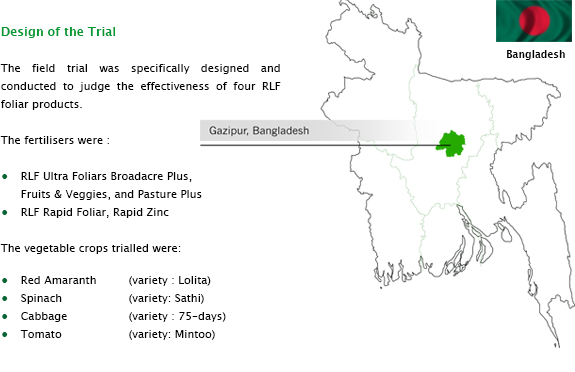 RLF has developed a special range of liquid crop nutrition products that concentrate on the micro-nutrients required for plant growth and development – specifically zinc, but also for manganese and copper.

RLF's focus on trace elements in liquid fertiliser formulations is recognised world-wide and considerable technical expertise and analysis has been applied to bring these products – with a new approach – to
the market.

The Rapid products apply the RLF technology of NDS (nutrient delivery system) combined with a blend of high-quality ETDA chelating agents, creating a delivery system that is both rapid and targeted. Each of these products delivers zinc and a complement of supporting nutrients to the plant with extreme efficiency and effectiveness. The IntelliTRace range is 100% fully chelated and sodium free, instead replacing this with valuable potassium.

RLF specialty crop nutrition fertilisers are all based on plant science. The physiology of the plant is what informs our Technical Team as they work to develop an increasing number of specialised fertiliser options for farmers and growers. When the needs of the plant, and the needs of the soil are fully considered, greater yield potential and crop quality outcomes can be experienced.

The Rapid products have an impeccable pedigree. They have benefited from the technological advances learned from RLF's Ultra Foliar Range of product.

Rapid Zinc and Rapid Max are both in ionic form which makes up-take in nutrient delivery far more efficient.

By working with granular fertilisers, zinc deficiency in the soil can be addressed.

As with other Ultra Foliar products, the Rapid products are packed with important nutrients necessary for plant development. It does this by delivering a multi-spectrum nutrient package – directly to the plant – that supports plant growth, strength and physiology thereby ensuring that NKP fertilisers and herbicides/fungicide are buffered during uptake for better opportunity for maximum gain.

Plant-available phosphorus in Rapid Zinc and Rapid Max is particularly effective for the uptake of trace elements. Both of these products maintain this – as well as a strong backgrounding of other micro-nutrients, particularly manganese, copper, sulphur, and magnesium.

In fact, if a foliar spray doesn't have plant-available forms of phosphorus it is potentially less effective.

One of the strengths of the Rapid products is that they help unlock previously unavailable phosphorus, giving greater access to the plant and helping achieve greater yield. This process ensures plants are protected from the problems of soil nutrient variability and provides the plant with the extra resilience to better handle the extremes of soil and other environmental conditions when confronted with them.

Being low pH and partially chelated supports better the 'safe entry' to the leaf, and increases leaf uptake of the nutrients. Once delivered the nutrition is readily available as the chelate in it breaks down much faster.

The major difference is that it is SODIUM FREE.


Most EDTA chelated trace element powders, and many chelated liquids are derived from sodium salt. Whilst the trace elements may be chelated, these products often deliver unwanted sodium to the plant.

The IntelliTrace product range, which includes IntelliTrace Zinc fixes this sodium problem in chelates. They are successfully formulated 100% EDTA chelated liquid fertilisers, where the metals of zinc, copper, manganese and iron are fully chelated whilst replacing the unwanted sodium with valuable and beneficial potassium in each of the IntelliTrace formulations.


The IntelliTrace range of products are particularly versatile and can be used as a foliar spray or in fertigation or irrigation systems.

RLF have delivered products to the market that are recognised to contain product innovation. Its technologies are scientifically advanced and provide solutions that support modern farming fertiliser practice in many different cropping environments.

Large areas of arable land across the world have soils known to be zinc deficient.

It has been recognised that the use of increased amounts of high quality phosphorus fertilisers along with new, high yielding varieties of rice, wheat and other crops, have contributed to this level of zinc deficiency, especially where the existing plant-available levels of zinc in the soil is marginal.

In Australia, 8 million hectares of zinc deficient land exists in one area alone on the border between South Australia and Victoria. Extensive areas exist in other parts of the country, notably in Western Australia where vast cereal crop environments are established.

Unquestionably this is a global issue, and the same issues with zinc deficient soils exists in every growing and cropping environment across the world. No country, region, or farmer is immune.

Once zinc-deficient soils have been identified however, the problem is easily and cost-effectively rectified by the application of zinc fertilisers, either to the seed or by foliar spray directly onto the crop.

But this problem of zinc deficiency throws up some significant pitfalls, and the following key points are important to understand:
Relatively speaking, this is only a recently discovered scientific fact – with it first being established in the 1940’s – however acceptance of this deficiency by many affected countries has only grown since the discovery of widespread zinc deficiency problems in the global rice crop, although wheat and corn crops are known to be similarly affected. This has only been within the past 30 years or so.

Some keys points linked to the discovery of widespread zinc deficiency were that it appeared:

to have been brought about by the change from traditional agriculture, which relied upon locally-adapted crop varieties with low inputs of nutrients, to more modern and higher yielding plant varieties that used relatively large amounts of farm fertilisers and agricultural chemicals, especially the
macro-nutrients

that many of the newer crop varieties were more susceptible to zinc deficiency, and with the increase in use of phosphorus this soil deficiency was more likely to occur

that the sequential cropping of rice and wheat on the same land, (a new style of farming) introduced into both South and East Asia, and made possible by new crop varieties and agronomic expertise has also contributed

In marketplaces such as China, India, Pakistan, Bangladesh and the Philippines for instance, where the need to maximise food production is at its greatest, land uses for rice and other cereal crops need to seriously address the issue of zinc deficiency as it is preventing crops from attaining their full
yield potential.

However, it should also be noted that zinc deficiency is not just a problem in developing countries. It occurs widely in most parts of the USA, throughout Europe and across Australia – all technologically advanced countries.

It is a global issue and must be addressed with a high sense of priority. 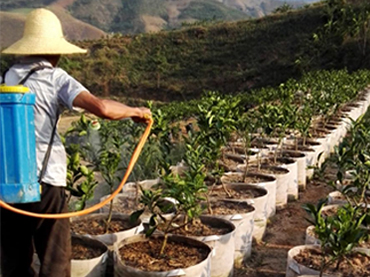 This Zinc Report explores the issue of zinc deficiency in a logical and practical way, and provides information about RLF products that can help combat this crop-inhibiting problem.

It will also demonstrate how RLF is making the same services of knowledge and understanding, ready access to expert technical advice and to a range of scientifically engineered liquid fertilisers readily available in today’s developed agricultural economies, accessible to marketplaces all over the world. Whether our customers grow in large industrial scale enterprises or farm on small-scale holdings, the same level of expertise and access to appropriate world-leading products is always available.