(Edwards et al., 2010) tells us that “the C4 photosynthetic carbon cycle is an elaborated addition to the C3 photosynthetic pathway. It evolved as an adaptation to high light intensities, high temperatures, and dryness. Therefore, C4 plants dominate grassland floras and biomass production in the warmer climates of the tropical and subtropical regions”.

C3 plants have the normal photosynthetic pathway in which the CO² is first fixed into a 3-carbon compound. In C4 plants, the first compound after CO² fixation is a 4-carbon compound.

The C4 plants of importance in agriculture are sugar-cane, corn, sorghum and millet.

In C3 species the rate of photosynthesis increases with rising CO², while in C4 plants that have a more efficient system of utilising and storing CO², the response to high levels of CO² in atmosphere is much less, (e.g. these plants photosynthesise faster at normal CO² levels and therefore have a higher water use efficiency than C3 plants, and also better tolerance to heat and drought). 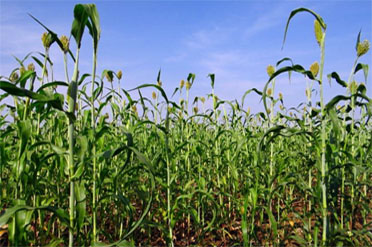 With the challenge of global warming requiring attitudinal change and industry innovation in the world’s cropping systems, sorghum cultivars are ideal crops to be trialled in the sub-tropical regions, and especially those regions experiencing more than their normal cycle of drought and heat.

For instance, in July 2015, ABC Rural News posted a story from Queensland, Australia titled ‘Sorghum beats wheat as Queensland’s most valuable cereal crop’. A spokesperson for the Queensland Alliance for Agriculture and Food Innovation Professor David Jordan acknowledged the benefits of nearly 50 years of study and research into this crop.

As far back as fifteen years ago in 2001, scientists working at the University of Queensland published a paper to the journal Phytogen (Vol.3 No.2, September 2001) pressing sorghum’s claim as a more desirable food crop.

The origin and early domestication of sorghum took place in North-Eastern Africa, and the earliest known record of sorghum has been dated at 8,000 B.C. This recording comes from an archeological dig near the Egyptian-Sudanese border. From here it spread throughout Africa an d became adapted to a wide range of environments, including those in India and China. Eventually it worked its way into Australia, where is has a considerable profile as animal pasture, but is now becoming part of the burgeoning human food market.