The information and figures were gathered as part of a formal survey of information on agricultural land management practices on Australian farms.*

The key findings were :

*RLF acknowledges the data collected in 2011-12 by the Australian Bureau of Statistics and made available courtesy of Department of Agriculture and Food WA.

In 2012 the following key statistics were determined as part of the annual survey of the agricultural industry animal production businesses on NZ farms.*

The dairy industry continues to grow and the following chart maps this progress over a ten year period since 2002 : 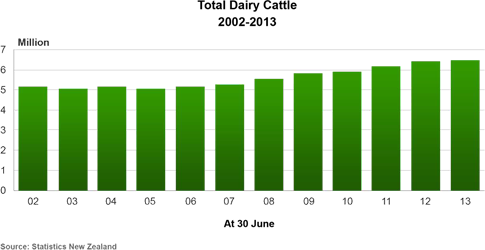 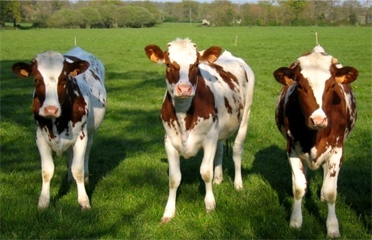 *RLF acknowledges the data collected in the 2012 Survey of Farmers and Foresters conducted by Statistics New Zealand.

In other Regional Marketplaces

In 2005, FA) recorded the following statistics for ruminant numbers. These figures capture the combined total of livestock for both meat and milk production.

A glimpse of wider global perspective shows animal production and grazing numbers from across Northern and Latin America as follows :

In the United States of America ruminant livestock production is a major segment of their agricultural industries. Income from beef cattle and calves, milk products, sheep, and goats totalled about US$93.7bn in 2007, compared to US$77.2bn income from grain crops. This shows the extent to which grazing is reflected in the country’s land use. In 2007 there were 373m hectares in farming enterprises, of which 165m hectares were in permanent pasture and rangeland (44%), 14.5m hectares of cropland used only for pasture (4%), 12m hectares in pastured woodland (3%) as opposed to 164m hectares in cultivated crops (44%) with the balance being assigned to other forms of agriculture such as horticulture.

In Canada pastures and grasslands occupy 44% of the total farmed area. In 2009 these areas were recorded as 15.5m hectares of natural forage land on private holdings, 5.7m hectares of seeded pastures, 2.9m hectares in sown hay and fodder crops and 5.1m hectares in alfalfa for both hay and pellets. In addition there are vast areas of natural rangelands. The total estimated value of forages used domestically exceeds US$1bn annually. Canada has an estimated 4.3 million beef cattle with the majority of these businesses being situated in the western provinces, with British Columbia being the largest.

In Argentina in 2005, there were 50.8m head of cattle, 12.5m head of sheep, 4.2m goats and 3.7m horses. In recent decades sheep numbers have declined considerably, whilst horse livestock increased dramatically.

In Brazil the predominant grazing production system relies on both native and cultivated pastures, which are stocked and grazed all year round. In 2004 there were 192m head of cattle, with three-quarters of these being for beef. There were 14.2m head of sheep, 1.2m buffalo and 9.1m goats. (Goats had increased dramatically on previous years). In addition there were 5.9m horses. Forage conservation is generally only managed for intensive dairy production systems and some rare feed- lot systems.

Solving the Nutrient Deficiency Problem Every crop, and every plant, has a quantitatively different nutrient need. But the ...
More Info
Boron Plus