Even though the watermelon treated with a RLF fertiliser program had not yet fully matured it still registered a sugar degree of 12.57. It won the title of ‘Melon King’ and RLF’s speciality crop nutrition foliar fertiliser Fruits & Veggies Plus won the fertiliser first prize at the festival. 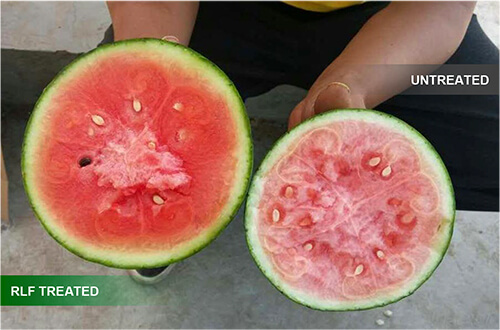 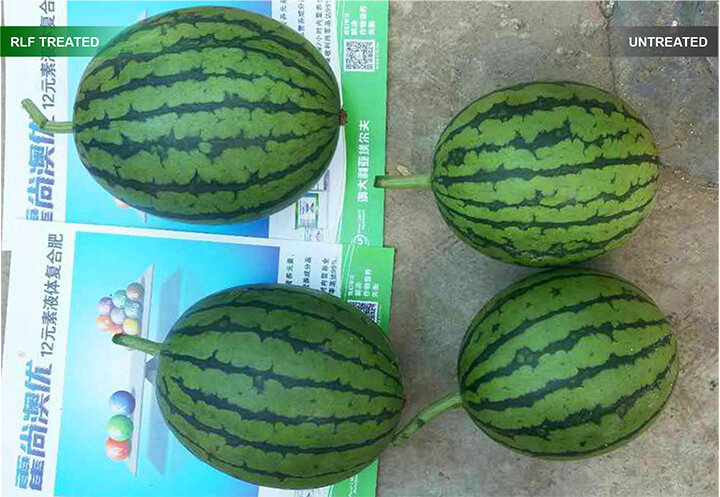 The photo images that follow show the advantages gained for the crop once treated with an RLF crop nutrition program.

The watermelon plants were characterised as lacking strength, with weak seedlings, fewer leaves and not such good growth before commencing the RLF
fertiliser program.

After 16 days using RLF products, the number of leaves increased significantly and the seedling growth became vigorous and healthy. 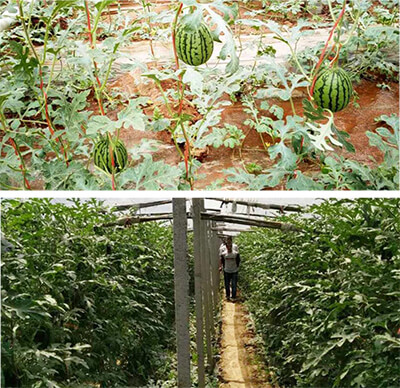 The watermelon treated with the RLF products showed many features over that of other fields that remained untreated.

Untreated fields had lower yield, smaller fruit size, with many turning white on the rind. There was also the observation that many of the untreated watermelon seedlings appeared to stop growing.
Demonstration field taken 9th May 2017
– the day of the Festival

About the Watermelon Growing Area

The watermelon planting area in the Daxu Village area has increased from 200 Mu (13.3 hectares) to more than 700 Mu (46.6 hectares) in recent years. There are 126 greenhouses all covered with plastic installed specially for growing watermelon. With the support of the local government, the Daxu Village growing community is rapidly increasing watermelon production.
Because the RLF team in the Province has faith in this developing venture it selected Daxu Village as the location of a demonstration and observation tour.This was arranged in accordance with the festival’s schedule to allow more people to witness the beneficial effects of RLF specialty crop nutrition products.

The large number of people at the festival on the day showed strong interest in the crop nutrition program of involving Fruits & Veggies Plus.

RLF has an important and evolving presence in China agriculture.

For many years now it’s technical teams have been demonstrating the benefits of RLF specialty crop nutrition fertilisers with local farming enterprises. The results achieved from the demonstration field and trial of watermelons in New Daxu Village, Luohe City, Henan Province is an exceptionally good one, and the RLF team is proud of this achievement.

Working alongside farmers to create greater value crop outcomes as well as improved financial returns is one of RLF’s important corporate goals. Congratulations to all involved.

Solving the Nutrient Deficiency Problem Every crop, and every plant, has a quantitatively different nutrient need. But the ...
More Info
Field Crop Plus

Solving the Nutrient Deficiency Problem Every crop, and every plant, has a quantitatively different nutrient need. But the ...
More Info
Dynamo – High N