The Problems for Tomatoes

The premature senility of tomatoes is a common phenomenon.

The symptoms are expressed by a greater number of malformed and cracked fruit, yellow leaves and the decreased ability of the plants to absorb nutrients. This results in a linear decline in tomato production and seriously affects the economic returns to growers.

However, these problems are not evident in the greenhouse of tomato grower Tang Chaoyun in Yiliang County, Kunming City, Yunnan Province. Tang Chaoyun has almost 10 years of experience in planting tomatoes and has his own criteria for selecting fertilisers for his crop. This year he began to use RLF Plant Milk for fertilisation 40 days after planting.

In order to better compare the growth effects of tomatoes, he specifically developed a Control area so he could be satisfied that his fertiliser choice was the right one! 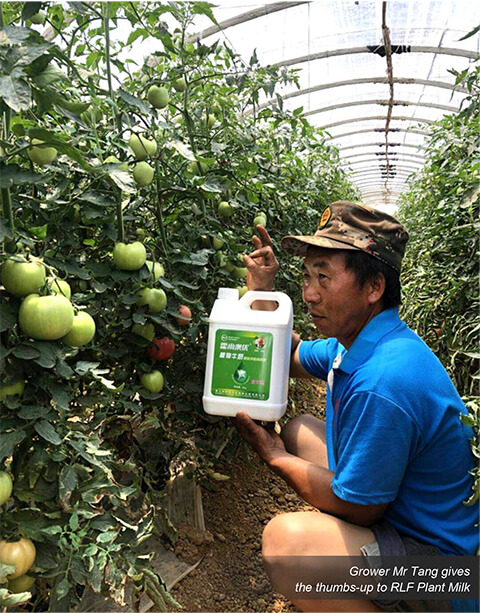 In the shed, you can see that the tomato leaves in the two areas are significantly different. The Control tomatoes have shriveled and yellow leaves, and the RLF-treated tomatoes have dark green leaves under the same conditions. Even after the low temperature frost of the Spring Festival, the degree of aging and disease of the RLF-treated tomatoes was significantly less than the Control plants. 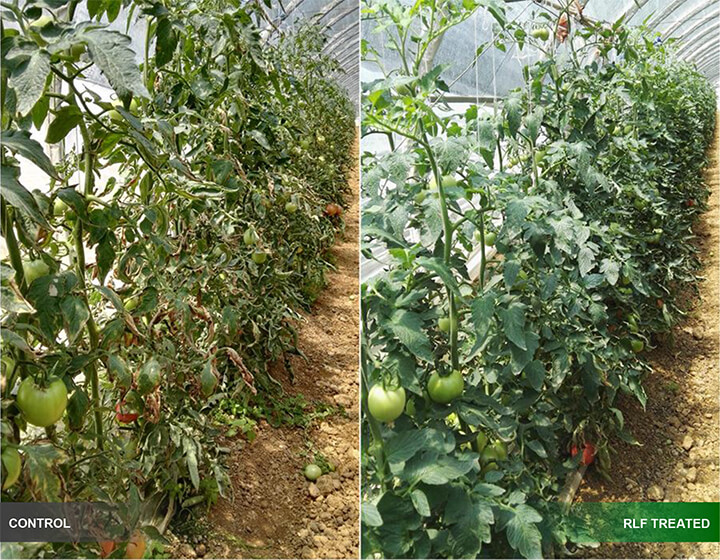 From the aspect of the fruit setting rate, the number of RLF-treated fruits was approximately 20% more than that of the Control group. Mr Tang found that the greenhouse tomato treated with RLF Plant Milk gave 4-5 barrels (about 10kg per barrel) more, per mu land than the Control group of tomatoes each time they were picked.

Following this, Mr Tang randomly selected several tomatoes for comparison from the two growing areas. These are
his observations:

Two tomatoes of similar maturity were cut, and the RLF-treated fruit was bright red and plump. These tomatoes had thicker flesh and better taste. After the sugar degree test, the sugar content of the RLF-treated tomato was 1 -2 points higher than that of the
Control group.

Because of the advantages delivered to Mr Tang in his fruit quality, the purchase price per batch was higher than the average price achieved for those from Control. Furthermore, the tomatoes treated with RLF products showed an increased yield of 200 kilograms per mu of land, giving a total increased income of 1,000 yuan (203.96 AU$) more per mu compared with the Control tomatoes.

The Stage by Stage Fertiliser Program and Method

Root Boost is the category given to describe the RLF products designed to focus on plant early vigor and root development. ...
More Info
Broadacre Plus