Helping to Repair the Damage in a Wheat Field
As this picture image shows the damage from the residue of herbicide application can turn leaves dry and yellow. It also causes roots to be underdeveloped,

The Problem at the Grower’s Feet!

As this picture image shows the damage from the residue of herbicide application can turn leaves dry and yellow. It also causes roots to be underdeveloped, the wheat seedlings to be weaker and grow slowly. These were the problems faced in the wheat field of grower Mr Liu of Bengbu, Anhui Province in March last year.

Because Mr. Liu’s method of herbicide application was not standardised, the concentration of the solution was uneven, and in some locations the amount of herbicide used was too great. This caused the tips of large wheat seedling leaves to turn yellow. Compared with the normal growing green wheat seedlings, the dry yellow in the middle appeared
more prominent.

If not remedied in time, the yield and quality of wheat at harvest time would have a considerable impact. 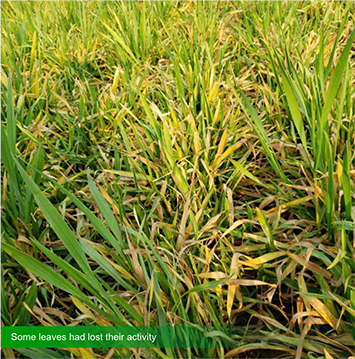 Because of the situation created by the herbicide damage residues, and yellow caused by sheath blight in Mr Liu’s wheat field, the RLF Technical Team devised a special remediation and nutrition program for his crop. 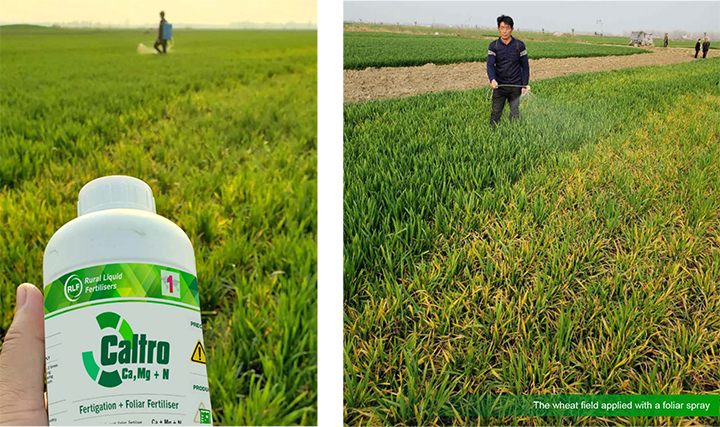 This visit was planned for 25th March 2019, seven days after the RLF Caltro had been applied. The effects to be seen are demonstrated below. The leaves were now completely green and the yellowing phenomenon had disappeared entirely.

Close Observation of the Leaves

From close observation, the new leaves were green and thickened, which makes for better photosynthesis. At the same time, the culm became thicker and the plant height increased.

Close Observation of the Roots

Observing the root system, the number of capillaries increased significantly and the root activity increased greatly, which enhances the ability for absorbing water and nutrients by the root system and improves the disease resistance of the wheat seedling.

This demonstration test has shown that the symptoms of yellowing caused by herbicide damage in wheat can be solved within one week of spraying with a scientifically balanced specialty product that directly addresses the problems. The wheat growth returned to normal after just seven days and Mr Liu was very satisfied with the positive effects of RLF Caltro on his wheat crop.

All About RLF Caltro 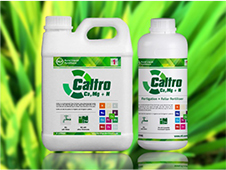