RLF China’s annual review and acknowledgement meeting was held in the Guilin Tailian Hotel, Guang Xi Province on 9th January 2017. This was a happy occasion as the entire team joined together to celebrate the successes of 2016 and anticipate the challenges and tasks for the year ahead. It was a joyous occasion, filled with team pride and excitement about the possibilities for 2017. 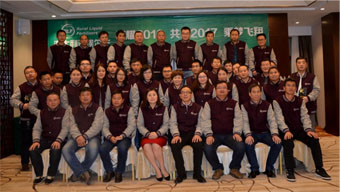 Presentations of Product and Research & Development

There were two key presentations, one introducing a series of products called Youmei. Technical Director Ma Deliang spoke of their release to the market with Technical Manager Li Qiongyu giving a detailed overview of the requirements for the field testing and demonstration for this product series. 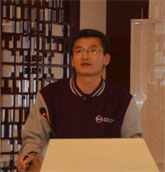 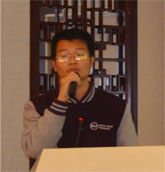 The R&D Director Qiu Mengbin introduced to the meeting RLF’s market development successes in 2016. In July 2016 the company announced its entry into the agriculture airplane control field. This was a particularly gratifying new breakthrough in specially developed crop nutrition products for application by agriculture airplane control. RLF gave the agricultural airplane control market a trace element water soluble fertilizer – Ao Feilai – which generated great excitement and discussion across the agricultural sector. This development achieved excellent responses and results in 2016. There are many new prospects and possibilities to be announced in 2017. 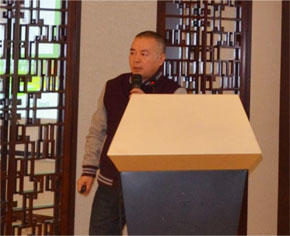 The Sales Directors and Sales Managers for each of the regions added further to the discussions and information sharing of company operations. Each gave an annual summary for 2016, with projections for 2017 in terms of the overall situation and expectations for their respective regions.

At this point in the celebrations, the China Executive Team Dr Mike Lu, General Manager and Melanie Wu, Deputy General Manager addressed the gathering and gave speeches of appreciation and acknowledgement. During his speech Dr Lu spoke of the overall success of 2016, in which 60% in sales performance growth was achieved. “This was only achieved because of the combined efforts of the entire team and I thank you for that”, he said. He spoke further of “the RLF family and how wonderful it was to see the regional teams working together to achieve not only growth in sales, but in technical advice and support for farmers”.

Dr Lu presented a series of Awards and Acknowledgements for excellence. 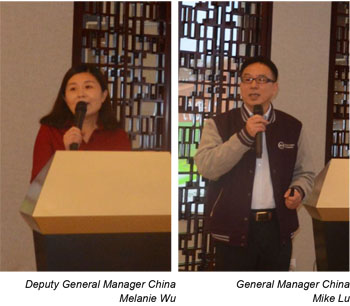 The evening continued with a series of other Awards and Acknowledgements across several special categories, including the Sales Star Award, the Promotion Star Award, the Pioneer Star Award and recognition of Gold, Platinum and Diamond Employee status.

The following photo board shows team members and teams who all performed extraordinarily well and whose efforts caught the attention of management for outstanding performance and attention to duties. 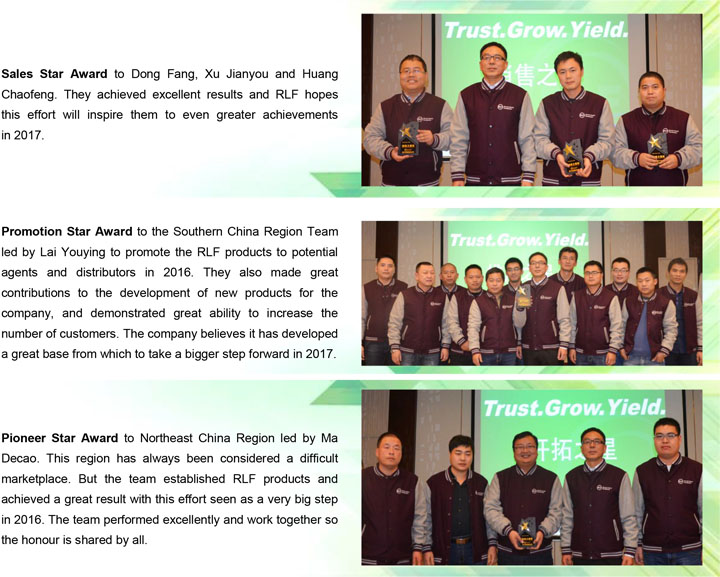 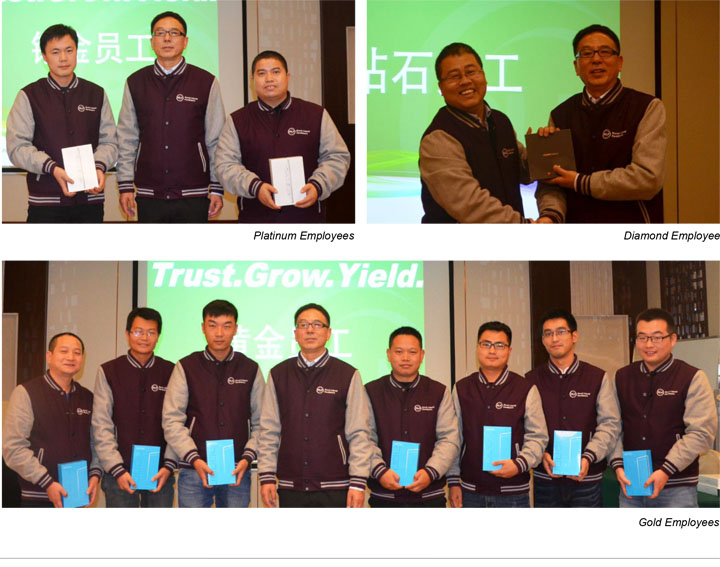 Looking back on the 2016 year, it has been an unforgettable one for each RLF team member.

The team, and the Company have grown together, and the message of trust, grow, and yield applies equally to the working relationships that have been established as well as the company’s customer and product relationships. Looking forward to 2017, it is anticipated and believed that the RLF team will go beyond past performance and achieve even better results. The year emerges as a very bright one because the same common goals and great outcomes are worked hard for by everyone.

This was a very successful Honours, Prospects and Awards event that was enjoyed by the entire RLF China team.