Experimenting with Foods High in Nutritional Value for Better Health
Castanea (a member of the Chestnust family of plants) generally grows in mountain regions 1,000 – 1,800 metres above sea level. The seed is ground into powder and used as a food additive. Besides this, the

What is Castanea and Why is it Grown?

Castanea (a member of the Chestnust family of plants) generally grows in mountain regions 1,000 – 1,800 metres above sea level. The seed is ground into powder and used as a food additive. Besides this, the seed can be processed, canned and sold in the supermarket. It is therefore, an ideal plant source for local farmers to increase their income-earning ability.

Fu Jian Province is located in the South-east of China. 80% of the land areas in this Province are made up of mountains and hills. This often means that there is a lack of land for farmers to plant cereal crops such as wheat, rice and corn, so in an effort to solve this food shortage challenge, the local government has encouraged farmers to plant Castanea.

However, many problems exist in the process of planting, mainly because of the low technical management knowledge of the farmers. The unscientific fertilisation methods traditionally used by the local growers has resulted in the decline of the quality and yield over the years.

Based on worldwide crop service experience, RLF China’s Balanced Nutrition & Better Crop project was formed to help the Chinese and Asian farmers increase their crop’s yield and quality by providing them with a properly balanced crop nutrition program for their Castanea trees. 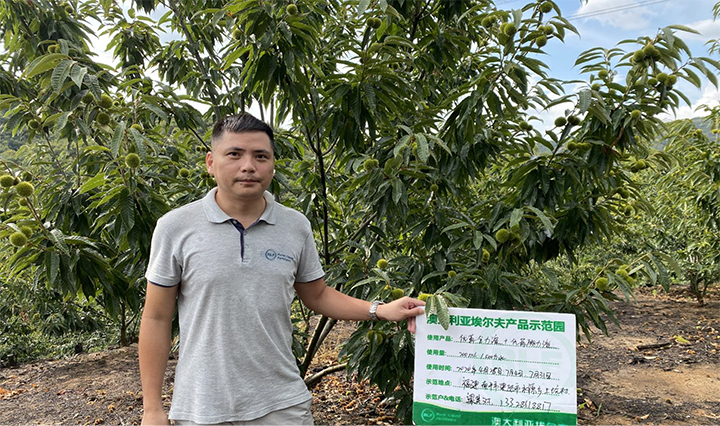 The RLF Technical Team developed a specific foliar nutrition plan for Castanea. They worked alongside the growers and guided them for nearly six months.

So far, in a number of demonstration sites, the Castanea trees that participated in the RLF nutrition program have performed well in terms of both leaf and fruit growth status.

According to field measurements, leaf thickness in the Control area was generally about 0.2-0.3mm. It was brittle, had low gloss and was nearly 90% covered with rust disease.

The blade thickness in the RLF-treated area was about 0.3-0.4mm, and the blades had better toughness and glossiness. The rust disease rate was below 5%, and the aging rate of old leaves was slower than those compared with the Control area.

During the field visit, the second physiological fruiting had finished. Though the fruit setting rate of the Control and RLF-treated areas was relatively similar, the difference in size was obvious. Further, there was approximately 10% empty bracts in the Control area. Physiological deficiency and diseases of leaves also occurred to different degrees. The higher aging rate of old leaves has a negative impact on the starch conversion and accumulation in the first half month before picking, and the yield estimate would be lower by at least 5% -10%.

Uniform fruit size, good leaf glossiness, healthy fruits without deficiency of elements. The yield was estimated at 800-900kg, and the final yield is expected to be much higher than that of the Control crop.

This meant the RLF nutrition program could be delivered at half the cost of the standard Control method.

According to the observations, the RLF-treated foliar crop nutrition program has solved the nutrient shortage and given a good guarantee for the key factors of nutrient transformation and starch accumulation in the later stages of growth. Literally this means the high leaf preservation rate of old leaves, and the extension of the photosynthetic time that guarantees the yield and quality of the
fruit yield.

The contrast effect of the demonstration was well received by the local farmers. Later in the season, the Technical Team plans to continue their follow up work to fully understand the fruit index comparison and the real yield benefits of the RLF Nutrition Program. 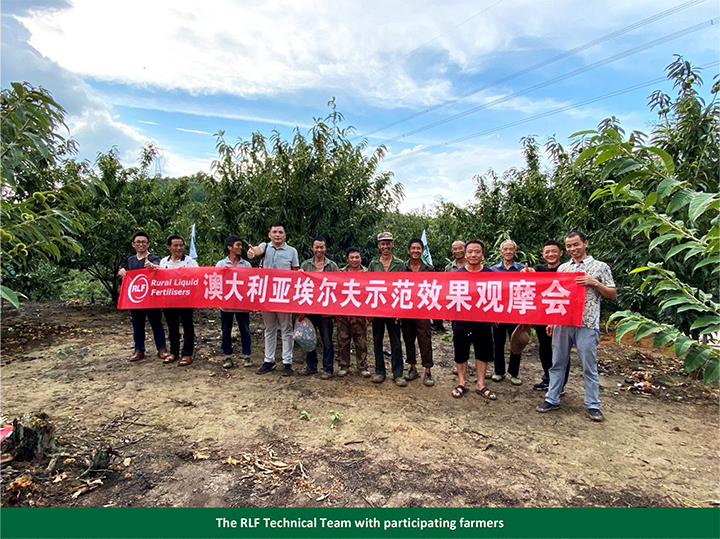