Learn about the 12 essential plant nutrients and their roles in plant health. All crops must have an adequate supply of each of these 12 nutrients to produce optimum yields. In accordance with The Law of the Minimum, if one or more nutrients are lacking in the soil, crop yields will be reduced, even though an adequate amount of other elements is available. Crop Yields may be limited by the element that is in shortest supply, so it helps to understand the key nutrients that are needed to make your crop thrive. 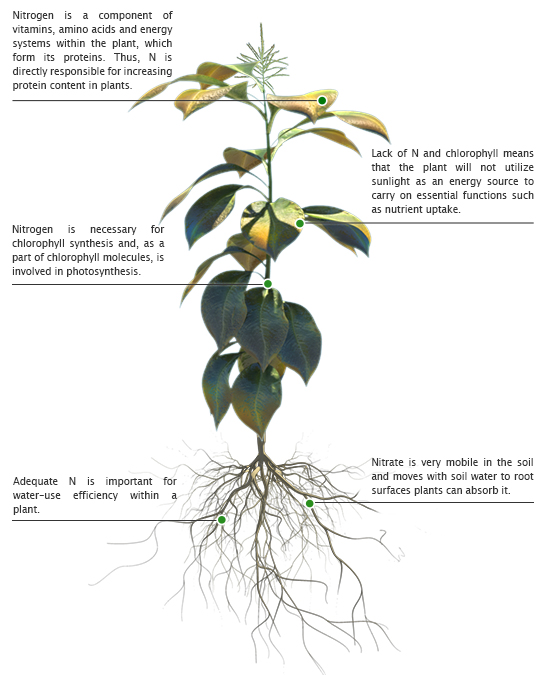 Nitrogen (N) is essential for plant growth and is part of every living cell. It plays many roles in plants and is necessary for chlorophyll synthesis. Plants take up most of their N as the ammonium (NH4+) or nitrate (No3-) ion. Some direct absorption of urea can occur through the leaves, and small amounts of N are obtained from materials such as water-soluble amino acids.
Click image for larger view
NITROGEN
DETAILS

Nitrogen (N) surrounds all plants in our atmosphere. In fact, every acre of the Earth’s surface is covered by thousands of pounds of this essential nutrient, but because atmospheric gaseous N presents itself as almost inert nitrogen (N2) molecules, this N isn’t directly available to the plants that need it to grow, develop and reproduce. Despite its identity as one of the most abundant elements on Earth, deficient N is probably the most common nutritional problem affecting plants worldwide.

Healthy plants often contain 3 to 4 percent N in their above-ground tissues. These are much higher concentrations than those of any other nutrient except carbon, hydrogen and oxygen - nutrients not of soil fertility management concern in most situations. Nitrogen is an important component of many important structural, genetic and metabolic compounds in plant cells. It's a major element in chlorophyll, the compound by which plants use sunlight energy to produce sugars from water and carbon dioxide, or, in other words, photosynthesis.

Nitrogen is also a major component of amino acids, the building blocks of proteins. Some proteins act as structural units in plant cells, while others act as enzymes, making possible many of the biochemical reactions on which life is based. Nitrogen appears in energy-transfer compounds, such as ATP (adenosine triphosphate), which allows cells to conserve and use the energy released in metabolism. Finally, N is a significant component of nucleic acids such as DNA, the genetic material that allows cells (and eventually whole plants) to grow and reproduce. With the exception of photosynthesis, N plays the same roles in animals, too. Without N, there would be no life as we know it.

Adequate N produces a dark green colour in the leaves, caused by high concentration of chlorophyll. Nitrogen deficiency results in chlorosis (a yellowing) of the leaves because of the declining chlorophyll. This yellowing starts first on oldest leaves, then develops on younger ones as the deficiency becomes more severe. Slow growth and stunted plants are also indicators of N deficiency. Small grains and other grass-type plants tiller less when N is in short supply.

RLF has a range of products that can support the healthy growth of crops, fruits and vegetables. These include products for remediation however more importantly RLF has a series of broad-spectrum high-analysis products that can assure avoidance or reduction of nutrient issue before they occur.
Some RLF products that may help are: